Federal Reserve: Taking away the Punch Bowl to Sober Up Inflationary Pressure

March 18, 2022—William McChesney Martin Jr., former Federal Reserve (Fed) chair from 1951–1970, is credited with the now-famous “punchbowl” analogy, referring to the Fed as “the chaperone who has ordered the punch bowl removed just when the party was really warming up.”1   Today, the Fed finds itself in the position of taking away the punchbowl again, but in the midst of a party that has been raging, rather than just warming up. Inflationary pressure has been exacerbated by a punch bowl spiked with a stronger-than-expected cocktail of extended supply disruptions and surging demand, fueled by pandemic fiscal and monetary policy easing.  Though the Fed can’t directly address supply-related inflation triggers, it took its first formal step toward sobering up demand side inflation pressure by kicking off the rate hike cycle at its March 16 meeting (Figure 1).

Published projections from the Fed post this meeting reflect an outlook for stronger inflation and a more aggressive rate hike path vs. its December meeting. We too look for inflation to remain elevated for longer, but see larger downside risks to 2022 growth relative to Fed projections, coming from the Russia-Ukraine war and the potential for elevated energy prices. In our view, a slowing pace of monthly gains in inflation in the second half of the year could prompt the Fed to reduce policy accommodation at a more moderate pace than it is now projecting. Despite our outlook for potentially slower growth this year, our base case is still one where the U.S. economy avoids recession. As a result, our clients’ portfolios remain overweight to equities and underweight to fixed income. However, we are aware of both upside and downside risks to the outlook and are ready to adjust portfolios as we monitor the evolving data. 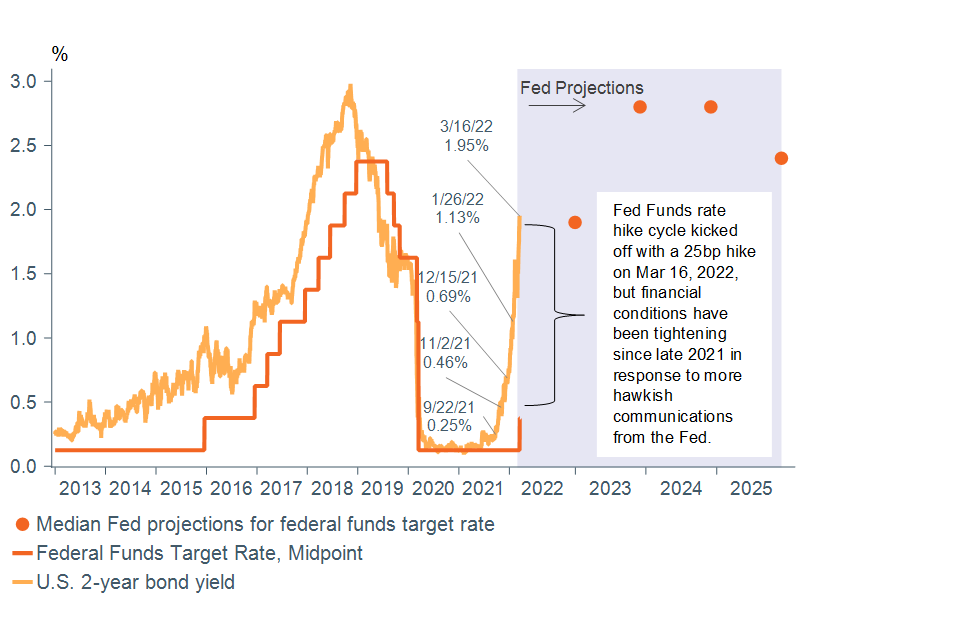 What did the Fed do?

At its March meeting, the Fed hiked the target range for the federal funds rate to 0.25%–0.50% and upped its projections for future rate hikes, as expected. Details from the meeting statement, economic projections, and Chair Powell’s press conference all pointed to a firm hawkish stance, even in the face of uncertainty arising from the Russia-Ukraine war.

Inflation and growth: Economic projections from the meeting and Chair Powell’s commentary portrayed inflationary pressure as taking longer to subside, due largely to virus flare-ups. The resulting delayed shift in consumer spending from goods to services, elevated supply disruptions, and dampened labor force participation, were all seen as bleeding into price pressures more broadly in recent months (Figure 2). The Russia-Ukraine war is expected to add to upside risks. Although this is the first explicit hike of the federal funds rate, the Fed has been effectively tightening since mid-December by communicating these coming hikes. That foreshadowing has pushed up short-term interest rates, such as the 2-year from 0.69% to 1.95% as of mid-March (Figure 1).

Growth, on the other hand, was seen as very robust and likely to remain resilient, even with downside risks coming from the war and the more aggressive rate hike path suggested by the Fed’s latest quarterly projections. Chair Powell took pains to communicate that “restoring” price stability and ensuring inflation does not become “entrenched” is the Fed’s top priority, given how strong labor markets are. With regard to the Fed’s dual mandate to achieve price stability and maximum employment, he highlighted that the former was a “precondition” for achieving the latter.

Figure 2: Price pressures have been broadening 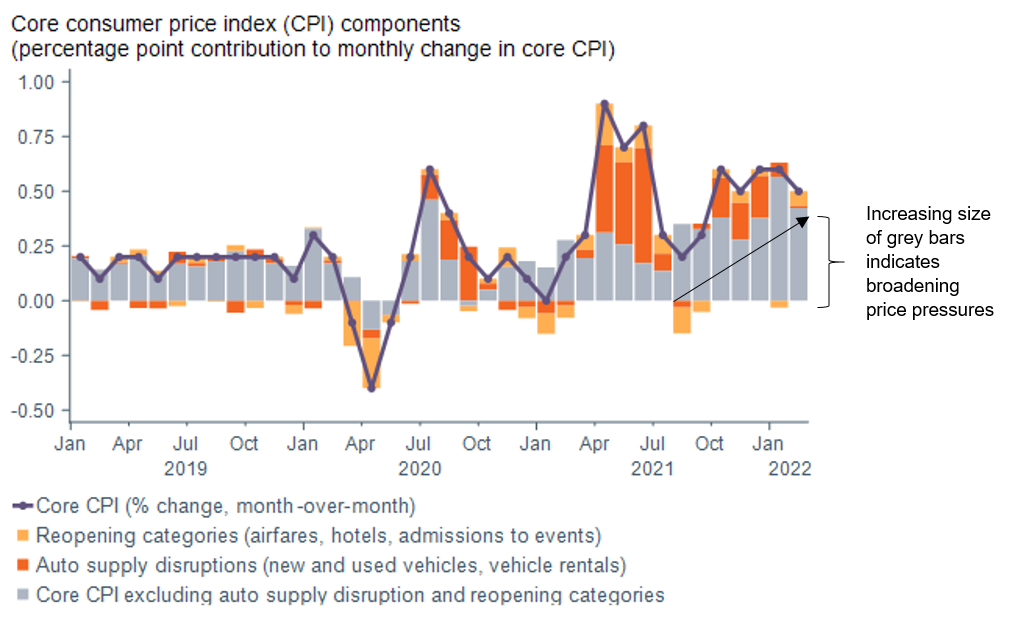 Interest rates: The median of the Fed’s quarterly economic projections for the federal fund rate target pointed to more rate hikes with a total of seven for this year (as compared to three hikes projected back in December), three and a half hikes next year (each of 25bps, or 0.25%), and steady rates in 2024. As for the pace of hikes, Chair Powell emphasized the need to get rates back up to neutral2 levels as “quickly as we practicably can.” He highlighted that every meeting was “live,” and pointed out that projections pointed to seven hikes, while there are a total of seven meetings this year—all of which imply a base case of a 25bps rate hike at each meeting. But he did not commit to a pace, leaving options open for a potential 50bps rate hikes if needed.

Interestingly, the median terminal rate projection came in at 2.8%, slightly above the Fed’s long- run neutral projection of 2.4%. This in line with its acknowledgment that the easing of supply side pressures noted above is not likely to materialize in the near term due to the Ukraine war—putting the onus on the Fed to step in to suppress demand modestly rather than just remove accommodation. Powell’s comments also suggest that the demand side of the economy is too strong in the Fed’s view, as manifested by labor market tightness he described as being at an “unhealthy level.”

Balance sheet normalization: Not only does the Fed want to take away the punchbowl, it needs to get rid of the backup punch before partygoers find it. That is in the form of its large balance sheet that could fuel future inflation. The meeting statement indicated the Fed expected to reduce its holdings of Treasuries and mortgage-backed securities on the balance sheet “at a coming meeting,” with Chair Powell indicating that this could be as soon as May. He emphasized that the framework would be familiar to that of the last cycle, pointing to caps on reinvestment of maturing securities rather than sales of securities at this stage of the process.

Due to the extended nature of the Russia-Ukraine war and the impact of more stringent sanctions and voluntary actions from corporations restricting the supply of energy and other commodities, we recently updated our estimated economic impacts on U.S. growth and inflation. While our base case forecast for 2022 GDP growth remains at an above-trend 3.0% GDP growth rate, a sustained oil price increase to $125/barrel for oil (West Texas Intermediate) on average for the year would lower our forecast to 1.8% (since higher energy prices eat into consumer spending). Despite these risks, we still see the economy avoiding recession, as we expect solid household and corporate balance sheets to support consumer spending, business capital expenditures, and inventory rebuilding.

With regard to our inflation outlook, higher energy prices in the near term combined with surges in other commodity prices, sustained wage pressure, and normalizing housing costs (a big part of the inflation index) have pushed out the time of expected deceleration. We still look for the deceleration to occur, but the magnitude of recent commodity price movements and the delay in slowdown brings the 2022 year-end CPI forecast to 4.5% y/y—up from our base case forecast at the start of this year of 3.0% y/y (Figure 3). If the month-over-month gains in inflation moderate in the second half of the year as we expect, the Fed will likely have room to normalize policy at a slower pace.

Our recent upward revisions to the inflation outlook in light of disruptions to energy and other commodity flows are similar to those communicated by the Fed at its March meeting. However, we see more elevated downside risks to growth compared to the Fed and expect the pace at which it removes policy accommodation may be slower. Even with the potential for softer growth, our base case is one where the U.S. economy is able to avoid recession and should remain more immune to the impacts of the Russia–Ukraine war vs. Europe. As a result, we remain overweight to equities and underweight to fixed income in portfolios. However, we stand ready to adjust portfolios given the fluid environment.

2 The theoretical interest rate that would neither stimulate nor restrict the economy.