March 16, 2021—Inflation is on the minds and lips of everyone these days, and the just-signed stimulus package is increasing those concerns. Vaccine deployment is picking up, COVID-19 cases are down, spending is accelerating, and the nation is clamoring to enjoy the outdoors and one another in a way we haven’t in a full year. With the passage and signing of the American Rescue Plan Act of 2021 (ARPA) last week, we have growing conviction of strong economic growth in 2021. But fears of inflation getting out of control ushered in a dose of stock market caution for the past several weeks and the Federal Reserve will weigh in this Wednesday.

When Ronald Reagan said inflation “is as violent as a mugger” he was speaking to the damage done to hard-earned household savings. We’re on the lookout for what inflation, or even concerns, could do to financial markets. Rising prices can be detrimental to fixed income, supportive of some equities but damaging to others, and can offer opportunity in real assets. We expect inflation of about 2.75% over the next 12 months, but the risk is to the upside. We do not expect the Fed to make any significant changes to its monetary policy stance this week because longer-term inflation projections remain mild.

Our portfolio recommendations reflect these expectations (along with other considerations) including: an underweight to core fixed income; an overweight to commodities; and within equities we recently shifted more toward value stocks and other factors that are likely to benefit from higher inflation and higher interest rates.

Last week President Biden signed the ARPA into law. It is extremely similar to what he originally proposed a week before being sworn in, except it does not increase the national minimum wage. The full plan is massive, and the main components from budget and stimulus perspectives are: stimulus payments to individuals making less than $80,000 per year and households making less than $160,000; extensions of unemployment programs to September and a $300 per week boost to payments; housing assistance; boosts to tax credits (earned income tax credit (EITC) and child tax credit (CTC)); subsidies for health care access; funds for vaccine distribution; and aid to state and local governments. With the massive package, we expect a boost to economic growth in 2021, as high as 9% growth assuming vaccinations remain successful and consumers spend a meaningful portion of the aid.

The prospect of such a large package gathered steam after the Democrats won both Senate seats in Georgia in early January, and its impact on expected inflation can be seen in financial markets. Inflation concerns are most clearly seen through the lens of the fixed income market and interest rates. Longer-term rates have moved up sharply so far in 2021. Going a little farther back, the yield on the 10-year Treasury has tripled since hitting an all-time low in July 2020 at 0.51%. In the nine months since, the gain of nearly a full percentage point is the most rapid since early 2018 when financial markets were digesting the market-friendly tax cut package of that time.

Higher rates were expected as the recovery took hold in the second half of 2020, followed by the extraordinary success of COVID vaccines at the end of the year. The real surprise has been how much of the movement—about half—has come since the end of January 2021. Rising rates translate to losses for bonds as the value of the principal is eroded, and core fixed income assets have performed poorly to start the year. 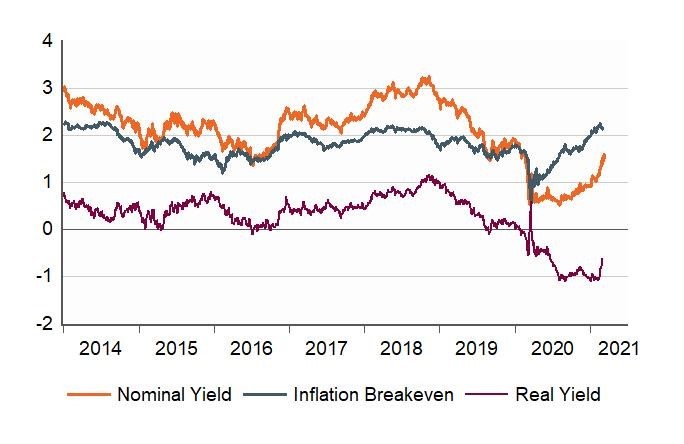 Equally as important as the familiar nominal yield are the underlying drivers. Long-term interest rates are driven, among other things, by expectations of real growth in the economy (embodied in the real yield) and by expectations of inflation. Most of the gain since mid-2020 has been driven by rising inflation expectations. Only in the last few weeks have fixed income markets shown a pickup in real yield.

While the anticipated higher inflation dealt a blow to fixed income, it has been a boon for equity markets, though unevenly. As my colleagues recently detailed, higher inflation, higher interest rates, and a steeper yield curve are boons for specific equities in the values and cyclicals categories, among others. But if inflation runs too hot and threatens to snowball, equities may be at risk if the Federal Reserve is forced into action.

We do expect inflation to pick up over the course of 2021, possibly ending the year as high as 3%, despite another weak inflation report earlier this week. We expect to see higher year-over-year readings in March, April, and May, but that is mostly a head-fake, and is due to comparisons with the COVID-induced shutdown months last year. More to the story of true inflation: a vaccinated public with more than $2 trillion in savings and more stimulus on the way will push inflation higher in the second half of the year.

But we don’t expect it to gather steam and snowball inexorably. As CIO Tony Roth and I discussed in a podcast as part of this year’s Capital Markets Forecast, such a snowballing effect requires consumers, firms, and markets to believe prices will continue to accelerate. In a self-fulfilling prophecy, they would react by demanding higher wages, pushing through higher prices for products, and driving interest rates ever higher, respectively.

At the moment, consumers and financial markets have that same view. The inflation breakeven rates described above for the next 10 years can be broken into segments, the first five years and then the subsequent five years. Throughout the past eight years markets have priced in lower inflation in the first five years than in the subsequent five years (orange line below the grey line). That has flipped in a meaningful way in recent months, with higher inflation now expected in the near-term, which can be seen as the most recent data points on the far right of the chart. Though markets are pricing in 2.5% inflation over the next five years, the highest since 2008, they are also expecting inflation to fall back down closer to 2% thereafter.

The Fed likely sees this as a victory, at least for the moment, as this is the exact dynamic they are trying to engineer following the changes made to their official operating policy last August. As a bonus, consumer surveys are reflecting similar expectations of higher inflation in the near term, but to come back down later as shown in the figure farther down. 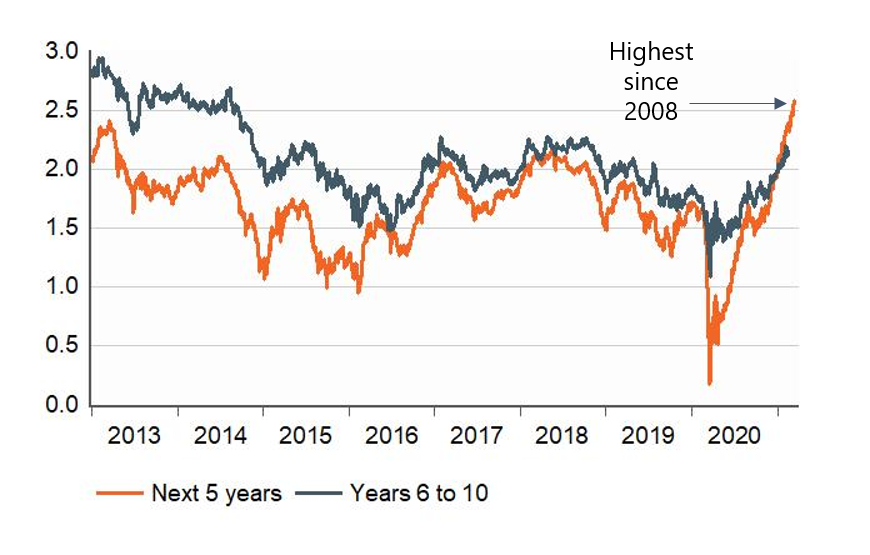 Higher inflation can be seen in rising interest rates, bond market signals, and consumer surveys. Jitters that such inflation could run higher are perfectly understandable as we are in uncharted waters with continued government stimulus, high savings, low interest rates, and strong consumer spending on the way, in our view. We do indeed expect higher inflation as we move through 2021, and that will continue to be supportive of our recent changes to portfolios. The key items we’ll monitor include the long-term inflation expectation measures shown here, and also company and industry surveys on pricing intentions. While we do not expect inflation to get out of control and force the Fed to clamp down in the near-term, that is a clear risk and a major focus of ours as we move through the year. 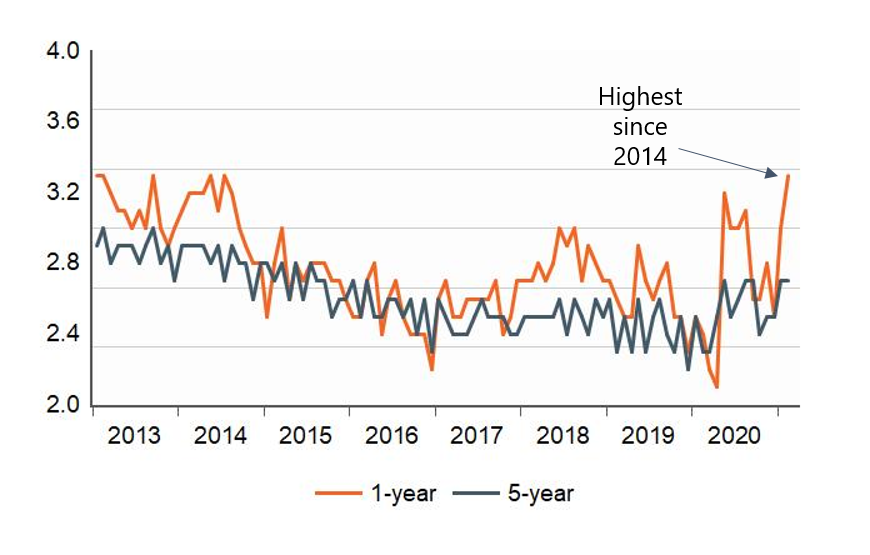 Data as of January 31, 2021. Sources: University of Michigan Survey of Consumers, WTIA.