September 21, 2021—China Evergrande Group is at the center of media headlines and investor concern, stoking fear around China’s property market and coinciding with higher volatility in equity markets. Below we cover our view on the evolving issues and main questions we are hearing from clients. In short, Evergrande presents a risk to China’s property market and economic outlook, but broader systemic threat to financial markets remains a tail risk event.

China Evergrande Group is China’s second-largest (and most indebted) property developer. The company also engages in property investment and management. It currently owns approximately 1,300 projects, operates in more than 280 cities across China,1 and directly employs over 120,000 people. The company operates across the property sector but 60% of its assets are housing inventory and it makes up 4% of new home sales in China.

What is the current issue?

The most indebted property developer in China and the world has an estimated $300 billion in total liabilities. The company’s debt situation has been known for years, particularly as the firm’s operations and debt levels have grown more rapidly than those of other Chinese property developers. The Chinese government has taken many steps over recent years to rein in leverage of property developers and excessive price appreciation in the property market. As expected, and intended, a slowing property market in China of late has resulted in year-over-year declines in new housing starts and land sales, forcing Evergrande to discount properties further to raise necessary cash.

Evergrande is scheduled to make a number of interest payments on its public debt this week, beginning with an $84 million interest payment due Thursday. It is unlikely the company will have the cash to make those payments, and a default of some sort seems likely. China’s markets have been closed on holiday for Monday and Tuesday of this week, and investors are expecting some action or commentary from Chinese policymakers to provide direction and allay fears of a total collapse.

How much of a systemic risk is a default by Evergrande?

Comparisons are being made in the media to Evergrande being China’s “Lehman moment,” or the equivalent of “too big to fail.” We do not subscribe to this analogy. Make no mistake: Evergrande is large. Its total liabilities equate to approximately 2% of China’s overall GDP, and the company alone represents 16% of the Chinese high-yield dollar bond market. However, the company poses much less of a risk to the broader financial market than did Lehman Brothers or the other investment banks at the epicenter of the 2008/2009 financial crisis. Roughly 50% of Evergrande’s debt represents accounts payable and acceptance bills. The rest of its debt represents a small portion of China’s overall banking sector loans.

Instead, the greatest risk posed by Evergrande is spillover to the broader property market and other developers. In a bad scenario (we hesitate to say “worst case”), a default could result in a fire sale of Evergrande’s properties, putting pressure on the property market and spilling over to other healthier property developers. It is estimated that housing, property, and related downstream sectors (like furniture, utilities, etc.) make up almost one-third of China’s economy. Chinese policymakers have the tools to avoid this scenario, so we expect this to unfold only in the case of a severe policy mistake.

The good news is that Evergrande’s balance sheet is not indicative of the overall real estate sector. Other developers appear healthier, with better profit margins, and are able to raise capital in the current market.

How does Evergrande risk relate to China’s recent regulatory crackdown?

Chinese policymakers have been on a regulatory tear, cracking down on industries across the board and pivoting away from the low-regulation, more capitalist approach of recent years. Leverage and price appreciation in the property market has been a focus of policymakers for years, so we do not expect the Chinese government to bail out Evergrande.

However, the nature of China’s “command-and-control” economy does make it such that the government can take steps to stem contagion without totally walking back its regulatory aims. The People’s Bank of China can add liquidity to the market (which it has been doing), oversee a more orderly restructuring of Evergrande’s debt, and limit the contagion effect by forcing banks to continue to extend credit to Evergrande and other developers while the company continues to operate. The government has every incentive to avoid a worst-case scenario that could result in public unrest and pain to employees, retail investors, and homeowners. Evergrande employees were forced to invest in the firm’s debt through wealth management products. The developer has also taken down payments on 1.5 million homes yet to be delivered (as of December 2020). We expect Chinese policymakers to try to protect these two interest groups, possibly through guarantees or prioritization in a restructuring, while allowing market forces to play out with institutional bond and equity holders. There is certainly a risk of a policy mistake leading to a more negative scenario.

How is Wilmington Trust positioned?

Wilmington Trust’s active managers own no Evergrande exposure and have no large positions in China’s property sector. Evergrande represents 0.01% of the MSCI Emerging Markets ETF, which we hold in a small weight in many portfolios.

Wilmington Trust portfolios hold no emerging markets (EM) debt and are overweight EM equities. Of continued discussion among our Investment Committee members is the scope and depth of China’s broader regulatory pivot. At this time, we assess the market to be discounting increased regulatory risks and impairment to Chinese corporate profit models. If policymakers do find a balance between regulation and growth, some securities appear very attractively priced. We are largely fulfilling our EM equity exposure through active management, where we see potential for managers to add value in this tumultuous market. We are monitoring risks and will communicate immediately should our views change. 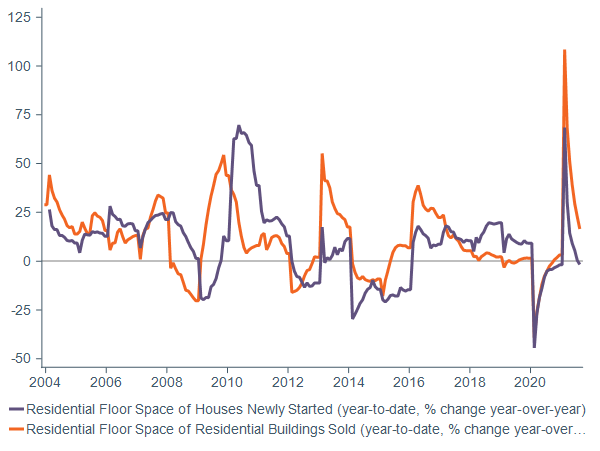