February 17, 2021—Bitcoin bulls gained another dose of credibility with the recent announcement that Tesla had bought $1.5 billion worth of bitcoin and would start accepting payments for its products in bitcoin.1 Just a few days later, BNY Mellon announced it would hold, transfer, and issue cryptocurrencies on behalf of asset management clients. These announcements come on the heels of a slew of other institutions, including Visa, Paypal, and Square, that in the past few months have indicated they are taking steps to support or enable purchases with bitcoin. The acceleration of institutional acceptance of bitcoin gives significantly more credibility to bitcoin as a medium of exchange and is a potential game changer for cryptocurrency’s ability to move from the fringes of the tech and investment community into the mainstream of the payments and retail industries. Below we provide an update to our prior research on the rapidly evolving crypto landscape, acknowledging increasing legitimacy for cryptocurrencies but not recommending a long-term investment in Bitcoin at this time.

The latest Bitcoin-related corporate announcements have helped shoot the price of Bitcoin to the moon, with the price of one bitcoin per U.S. dollar increasing over 350% since the end of September 2020 (more than 1000% on an annualized basis). This is more than 150% higher than the prior peak in December 2017. We are increasingly asked by clients and other investors some version of, “What do you think of Bitcoin?” The answer, in our view, is best broken down into two parts:

Bitcoin as a Medium of Exchange

In short, we believe cryptocurrencies will increasingly be part of the payment landscape, but how much “market share” will be held by Bitcoin versus other cryptocurrencies or central bank-backed digital currencies is questionable.

The underlying premise of Bitcoin—to be able to pay anyone anywhere with the same ease as exchanging cash but with blockchain technology that ensures absolute security of ownership—is as appealing as ever, particularly for less banked parts of the world. Adoption rates of cryptocurrencies will increase as younger demographics, who are more accepting of technology, age and play a bigger role in the economy. Payment providers and banks are likely to continue the trend of broadening support for digital currencies.

However, Bitcoin is not quite ready for prime time as a broadly used medium of exchange across an $88 trillion global economy. Bitcoin fees are high and volatile, with the average daily transaction fee for February 2021 averaging $18.31. While fees remain high, purchasing your morning coffee with bitcoin is a nonstarter, and usage will be limited to luxury goods purchases—like a Tesla. Fees may come down as Bitcoin becomes more widely available on popular payment applications. Scalability is also an issue for Bitcoin. Today the technology behind Bitcoin can only manage seven transactions per second, compared to 65,000 transactions per second for Visa and 45,000 for Mastercard2. With a gap of this magnitude, there is little incentive for retailers large or small to accept Bitcoin. Another issue is how energy intensive it is to mine for Bitcoin, which flies directly in the face of the green energy movement. According to a recent BBC article and Cambridge researchers, mining for Bitcoin consumes around 121.36 terawatt-hours per year, which is more than the entire country of Argentina. Lastly, the mechanics of Bitcoin creation (mining) could potentially result in a severe misalignment of supply and demand of Bitcoin at any one time, creating significant volatility.

Bitcoin is also competing directly with “stablecoins” (cryptocurrencies that are backed by fiat currency like Facebook’s Libra) and central bank digital currencies (CBDC), many of which offer better speed3, scalability, and potential adoption. According to a 2021 survey by the Bank of International Settlements, 86% of global central banks are working on developing a CBDC. Bitcoin’s biggest challenge may come from the People’s Bank of China, which has been researching and testing a digital currency in some major cities since 2014. Interestingly, unlike bitcoin, e-RMB will not run on blockchain, as China’s policymakers doubt that blockchain provides the necessary infrastructure for global retail. Instead, the e-RMB will be issued by the central bank and disseminated to local and commercial banks before making its way to consumers.

Our conclusion is that Bitcoin, cryptocurrencies, and central bank digital currencies are part of a secular move away from traditional payment methods toward a cashless and contactless payment future (discussed in Theme 3 of our 2021 Capital Markets Forecast). However, the latest endorsement of Bitcoin by Elon Musk is not enough to solidify Bitcoin’s dominance in that future.

Bitcoin as an investment

Bitcoin’s potential as a more mainstream medium of exchange does not make it an attractive long-term investment, and we are not recommending it in client portfolios. It remains far too speculative, volatile, and ungrounded in fundamentals. As noted in our November Wilmington Wire post, in recent years the volatility of Bitcoin has consistently been 5–10 times that of the S&P 500. To have a place in a long-term investment portfolio, our view of additional upside would have to compensate for that massive risk premium.

The recent vertical upward price move now creates considerable downside price risk in the event of a potential data breach, increased regulation, or other setback. As a reminder, in 2017 Bitcoin exhibited similar price movement to today, climbing more than 2,300% in a year, only to lose 83% of its value over the subsequent 12 months (Figure 1). Regulatory risk today is difficult to dimension, but we see it as inevitable for mainstream adoption of cryptocurrencies, given evidence of abuses including tax evasion, money laundering, and terrorist financing. 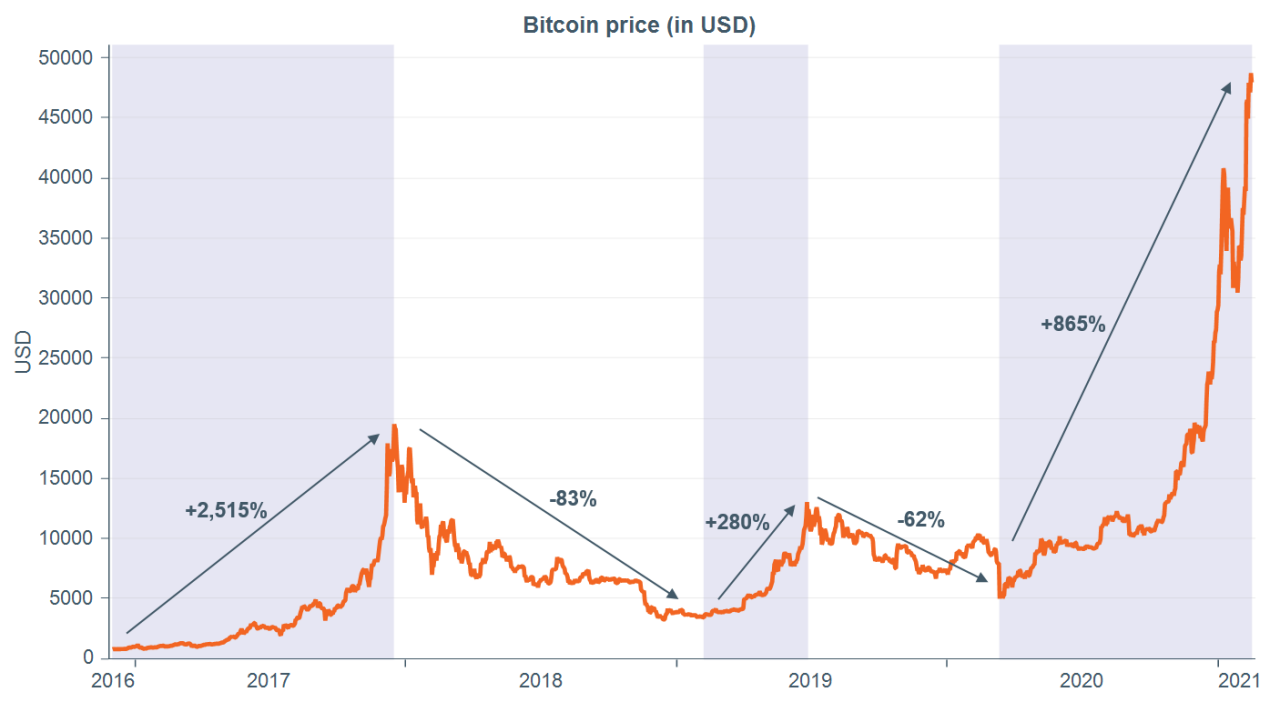 The past is not indicative of future results.

Some of the recent momentum of Bitcoin may be prompted by the flood of monetary stimulus and subsequent concerns of U.S. dollar debasement and inflation. We continue to view commodities, Treasury Inflation-Protected Securities (TIPS), and real estate as more attractive hedges against a weak dollar or an inflationary upswing.

Notwithstanding some of the current and inherent flaws of Bitcoin, we think it cannot be ignored. We believe cryptocurrencies are here to stay and will play an increasingly prominent role in global payments and transactions. However, the cryptocurrency landscape is becoming more crowded, and Bitcoin’s dominance is not secured. Given Bitcoin’s unclear future and very high levels of volatility, we believe the investment prospects for the cryptocurrency are limited to short-term speculation. For those willing to speculate with a portion of their capital base and who can tolerate significant volatility and loss of capital, there may be money to be made in the short term. At this time, we are not recommending Bitcoin in multi-asset class portfolios and are seeking other ways to generate attractive risk-adjusted returns for our clients.

[1] According to CNBC, the statement of accepting bitcoin for purchase of Tesla products would be “subject to applicable laws and initially on a limited basis.”

Reference to the company names mentioned in this blog is merely for explaining the market view and should not be construed as investment advice or investment recommendations of those companies. Third party trademarks and brands are the property of their respective owners. Indexes are not available for direct investment.

Risk premium is the investment return an asset is expected to yield in excess of the risk-free rate of return. An asset’s risk premium is a form of compensation for investors. It represents payment to investors for tolerating the extra risk in a given investment over that of a risk-free asset.