A High Wire Act in Congress, With All Eyes on the (Debt) Ceiling

Congress has returned to center stage, this time with its recurring high-wire act of addressing the debt ceiling (its limit on federal government borrowing). For markets, watching the process can be a hair- raising experience accompanied by elevated volatility, as the costs of a policy misstep could result in the U.S. Treasury defaulting on its debt. That puts us at risk of potential financial market turmoil and a plunge back into economic recession. However, our base case is that Congress will find a way to raise or suspend the debt ceiling, as it has done 107 times in the 82 years since the debt ceiling was established, to avoid these drastic potential consequences. Below, we update a previous note explaining what the debt ceiling is, why it matters for investors, and what we expect going forward.

What is the debt ceiling?

The debt ceiling is a limit set by Congress on the maximum amount of debt that the U.S. government can hold, similar to a credit limit on a credit card. The first debt ceiling was enacted in 1917 at $11.5 billion, as a way to simplify the previous process in which Congress was required to approve each debt issuance with separate legislation. In 1939, Congress adopted a broader debt ceiling of $45 billion encompassing most government debt. Since then, public debt has grown substantially over time, as the debt ceiling has been raised or suspended to allow the Treasury to continue to issue the debt needed to meet its payment obligations (Figure 1).  The latest suspension, enacted in the 2019 Bipartisan Budget Act, expired on July 31, 2021. Because Congress did not act ahead of this deadline, the debt ceiling was reinstated as of August 1 roughly $28.4 trillion (previous debt limit of $22 trillion, plus the cumulative borrowing that occurred during the period of suspension).

Figure 1: Total public debt subject to the limit over time 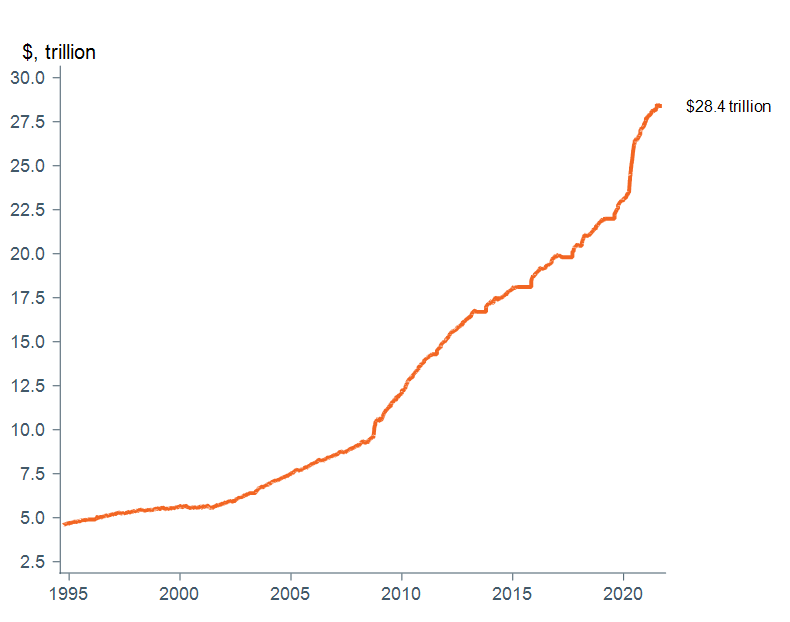 Why does the debt ceiling matter?

Technically, the reinstatement of the debt ceiling on August 1 meant the Treasury was not able to issue any additional debt, in theory impeding its ability to pay for the roughly $500 billion in deficits projected for the remainder of the fiscal year (August and September).[1] However, in practice, the Treasury has been able to use “extraordinary measures,” a set of accounting tools used to extend its ability to make essential payments and avoid default. Estimates suggest these “extraordinary measures” will allow the Treasury to meet its payment obligations in mid-late October to early November, though the exact drop- dead date is hard to pin down given uncertainty around timing of government revenues, payments, and pandemic-related economic relief. After the drop-dead date, unless Congress acts to raise or suspend the debt ceiling, the Treasury would face the risk of an unprecedented default on its debt.

How have debt ceiling negotiations impacted markets in the past?

Debt ceiling negotiations do not necessarily need to lead to default worries. Since it was established by Congress in 1939, the debt ceiling has been raised approximately 100 times, and suspended seven times since 2013. While there may have been uncertainty around many of these negotiations, most have resolved themselves without major default concerns.

However, it is useful to understand the potential impact of the threat of default on markets. The 2011 debt ceiling episode stands out most clearly as an example of what might occur in such a situation. It was the first time that members of Congress had suggested the real possibility of default as a potential outcome if negotiations around the debt ceiling were unsuccessful. One notable difference, however, is that Congress was under divided control at the time. Though it is difficult to parse out the specific impacts of the debt ceiling crisis—given that Europe was experiencing a debt crisis at the time as well, and U.S. economic data at the time were choppy—measures of stock market volatility spiked, credit spreads widened, and consumer and business confidence declined. There was a notable fall in the S&P 500 index (nearly 17%) in the time period around the debt ceiling debate between the highs in July to the lows in the days after Aug 2, when the debt limit was finally increased. The Government Accountability Office estimated that the crisis increased the Treasury’s borrowing costs by $1.3 billion during the 2011 fiscal year as a result of rising interest rates on some Treasury bills. The episode culminated in the first downgrade of U.S. sovereign credit by a major credit agency (S&P), from AAA to AA+, due to concerns about longer-term debt sustainability, but also due to instability of the political process. It took nearly nine months for the equity market to revert to pre-debt ceiling crisis levels.

Looking at fixed income markets, in theory, yields would be expected to rise in response to the threat of default during debt ceiling showdowns. However, contrary to expectations, history shows the US 10-year yield actually declined in four out of five instances—though it is hard to extract the unique impact of debt ceiling dynamics given numerous other factors impacting markets, as well as the structural move lower in interest rates in recent decades.

What would be the consequences of not raising or suspending the debt limit in the coming weeks (unlikely in our view)?

The consequences of not suspending or raising the debt limit in a timely manner would be very severe in our view because it could result in the Treasury defaulting on its existing debt. The Treasury may technically have the ability to prioritize payments of principal and interest, as it could replace maturing debt securities with new ones without increasing the debt limit. However, we believe inaction on the part of Congress would raise the prospect of eventual default in a much more significant way, and this could have disastrous implications for both U.S. and global financial markets. The U.S. Treasury market and U.S. dollar together have unique roles as an anchor and backbone of the U.S. and international financial system. They serve as a benchmark for pricing and as collateral for many securities and are among the most liquid financial assets. They also serve as safe-haven assets for investors globally, as there has been no precedent for default.[2] It is hard to gauge the exact impacts given the lack of historical precedent, but if default were to occur, the impacts would likely be severe and far-reaching. It is likely that interest rates could spike sharply (which would increase borrowing costs), credit markets could seize up, and the dollar’s value could plunge, with these impacts reverberating across the world’s financial markets. Surging uncertainty, loss of consumer and business confidence, and required drastic cuts to government payments to households and businesses would likely push the economy back into recession as well. The massive and severe consequences of default explain why expectations for U.S. default are typically so low, and why we would expect Congress to act to avert such outcomes.

What are key developments to watch for?

Debt ceiling negotiations will be complicated by other looming deadlines related to key legislative priorities.

Risk of government shutdown: Outside of the drop-dead date, September 30 is the next most pressing deadline facing Congress right now. It will need to approve funding for government spending in fiscal year 2022, either by passing a 2022 federal budget, or by a stopgap measure to provide temporary government funding until formal budget approval can be reached. Inaction on this front could lead to a government shutdown. While government shutdowns are not desirable, risks are significantly different relative to those around debt ceiling negotiations. Government shutdowns result in government employees and contractors not being paid during the course of the shutdown.  While this can have very real impacts on market volatility, consumer sentiment, business confidence, and growth, these impacts largely subside once the government reopens.

What is Wilmington Trust’s view?

High stakes around current debt ceiling negotiations, along with intertwined and complicated political dynamics around passage of the bipartisan infrastructure and larger reconciliation bill suggest that the coming weeks may result in near-term market volatility. These events are also coming at a time of elevated uncertainty in other areas of the economy and markets, as the Fed is set to embark on a quantitative easing (QE) taper of its asset purchases, and China is trying to avoid a policy mistake in how it manages the troubles of property behemoth Evergrande, along with broader concerns about growth and regulation.

However, our base case is that Congress will act to raise or suspend the debt limit in order to avoid the severe potential consequences of default. While the risks of a government shutdown are higher, we would expect the impact on markets and the economy to be shorter lived.

We remain constructive over a 9–12 month horizon and expect stocks to outperform bonds over that timeframe. We recently revised down our GDP forecast for 2021 but still expect U.S. growth to remain above trend and supportive of risk assets. A recovering labor market, solid consumer, and capex are all supports for the economy going forward. We continue to expect inflation pressures to subside as we move toward and into 2022, which should give the Fed the ability to maintain its accommodative interest rate policy, even if the start of QE tapering is imminent.

[1] The Congressional Budget Office’s July 2021 monthly review estimated the budget deficit reached $2.5 trillion in the first 10 months of the fiscal year (October 2020–July 2021), relative to budget projections that look for a total of $3.0 trillion in deficits for fiscal year 2021.

[2] There was a technical default in 1979 when the U.S. Treasury failed to make timely payments on a small number of payments to bondholders. However, this was attributed to bookkeeping errors, occurred on a tiny fraction of Treasury’s overall debt at the time ($120 million out of $800 billion total debt outstanding) and the debt was eventually paid off.